The musician behind Hoodies at Night is Jonathan Dauphinais. One thing is certain for Jonathan: He is not interested in the comfort zone.

He likes to make people react strongly to his sounds; and he likes to be surpirsed by his collaborations; that is where he excels. Since 2009, Jonanathan has played both in the studio and live with notorious acts such as Ariane Moffatt, Beast and Dumas.

Throughout this time, he has been producing albums and composing music for TV, Films, and other artists while fine-tuning his invention: the Keybass. Jonathan created his very own instrument in the early years of his life as a musician.  The Keybass combines both the rock and electronic worlds, fusing together a polyphonic synth with an electric string bass.

Dauphinais has played bass in a bands since he was a child and studied music at the University of Montreal. In 2014 he wanted to shake things up and create new, cutting-edge music under the artist name Hoodies at Night.

He started to book numerous sessions at his studio with all kinds of people. From friends to strangers, from renown artists to amateur musicians and anybody willing to make « noise », he began sharing his new music with collaborators. He even made adds on kijiji and craigslist to see what could happen, just have that feeling where you don’t know what you’re going to play just before you play it… no second-thoughts, just fun and music. Jonathan wanted to be at his best and bring out the best of any sounds made for Hoodies at Night.

He found this process very inspiring. He realised how changing the people around you will completly change the ideas you come up with. That’s exactly the philosphy behind Hoodies at Night.

In 2015 Jonathan started to work more seriously on songs for Hoodies at Night.  His goal was to make music with the most talented people around him.

« Knowing that the artist who blows you away is coming over to your studio to work on a song is a thrilling feeling. » 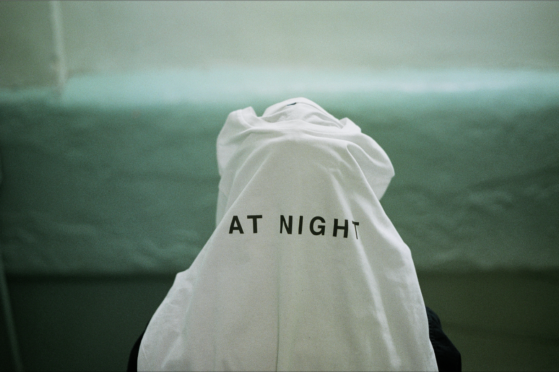 « That is how I want to feel everyday, ready to give my utmost best to the music. », says Jonathan.

He next teamed up with the best artists around him: He played a rough mix of his song « Shore » feat. Milk & Bone at a friend’s party and everthing took off after that. The Hoodies at Night track was played at the right place and at the right time : Shore ended up being the « Osheaga 2016 » anthem in the promotional interactive vide
o and the entire marketing campaign for the Montreal music festival.

The next singles for Hoodies at Night include collaborations with Husser, Kroy, and JMR to name a few. His style is compared to Jamie XX and Flume, but his sound is uniquely his own.